My Template to Research, Design and Ship iOS Apps

Today I’m sharing a template I use to help gather my thoughts anytime I start on an app: 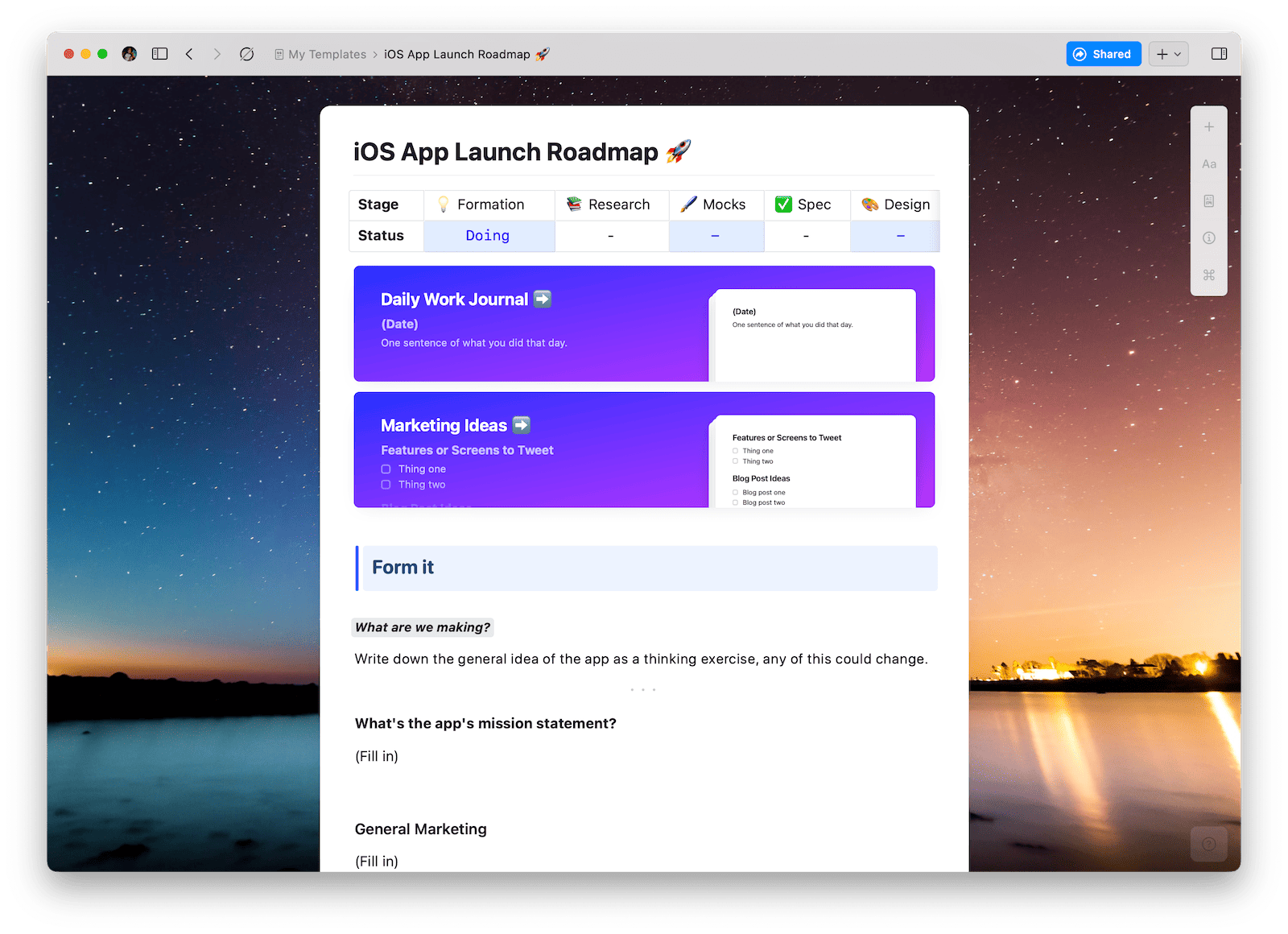 You can get it here. It’s a Craft Doc template, so you can either duplicate it in Craft or export it to another app of your choosing to use it.

Before I explain the gist of it, I want to be clear on when I use it.

A lot of apps start with pure excitement over an idea. Don’t lose that! Cracking open Xcode right away (especially in the age of lightning fast U.I. development with SwiftUI) is a wonderful way to test a quick idea, or let some creative energy out. Keep doing that.

But, what happens next? For me, that’s when I use this guide to feel out the idea, and sorta validate if I want to actually spend more time on it.

The whole point of the template is to carve out the idea, see what else is out there and then finally build it if it seems worthwhile. To do that, I follow these steps (sometimes not in this exact order, but close):

Formation
After I’ve hacked around in Xcode and I’m still excited about the idea, I try to figure out what exactly it is. What’s the idea explained in one sentence? If I had to put it on the App Store, what would the title and subtitle look like?

All are subject to change, but it’s a useful thought exercise for me. 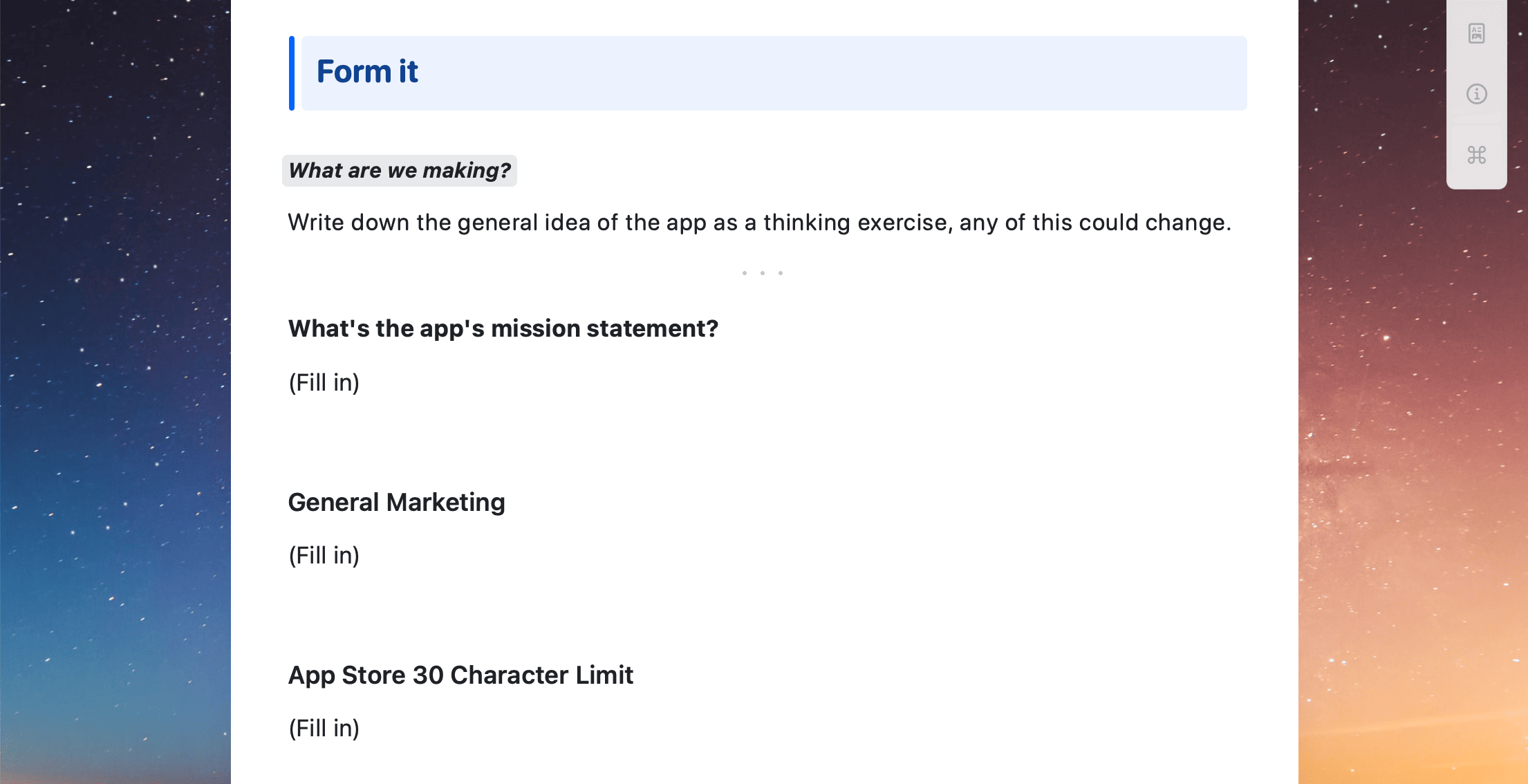 Research
Okay, so I know what it might be - what else is out there? Are there holes in the market I could come in and plug? Of the similar apps, what are they doing well, not well, how are they priced?

This helps me figure out monetization and any other key features I might need to look at. 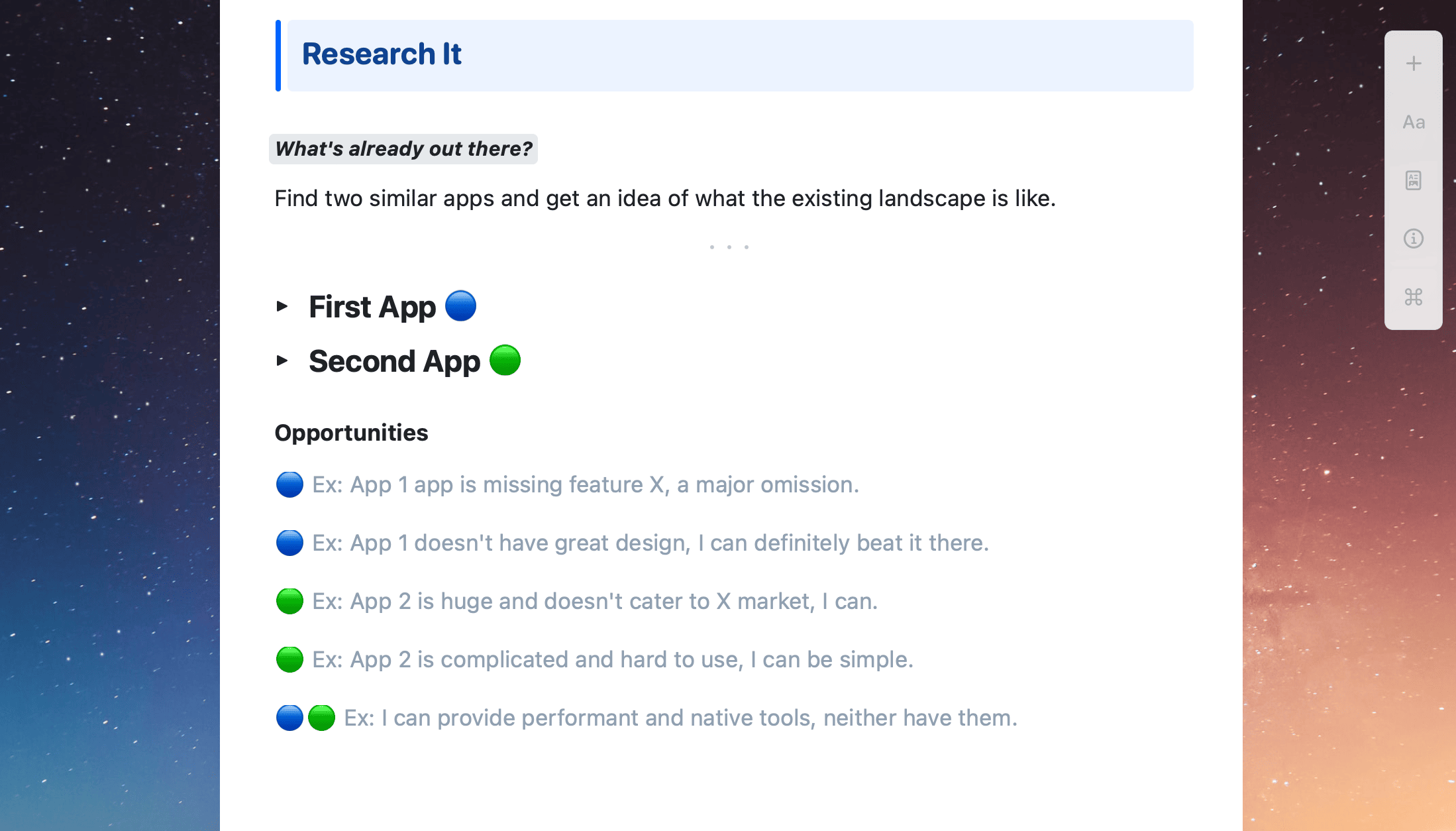 Mocks
Now, it’s the “messy middle”, where I just sketch out the flow in very low fidelity designs. I want to have an idea of all of the screens I need for a lean MVP to ship. For me, that’s key - I want to think about every screen I’m going to show (which usually correlate to a view controller in code) because it helps me cut scope.

Spec
Here, I write down a focused set of tasks to get version 1 out of the door. I also leave a little room for some “secret sauce”, for example - maybe a custom view controller transition or two. 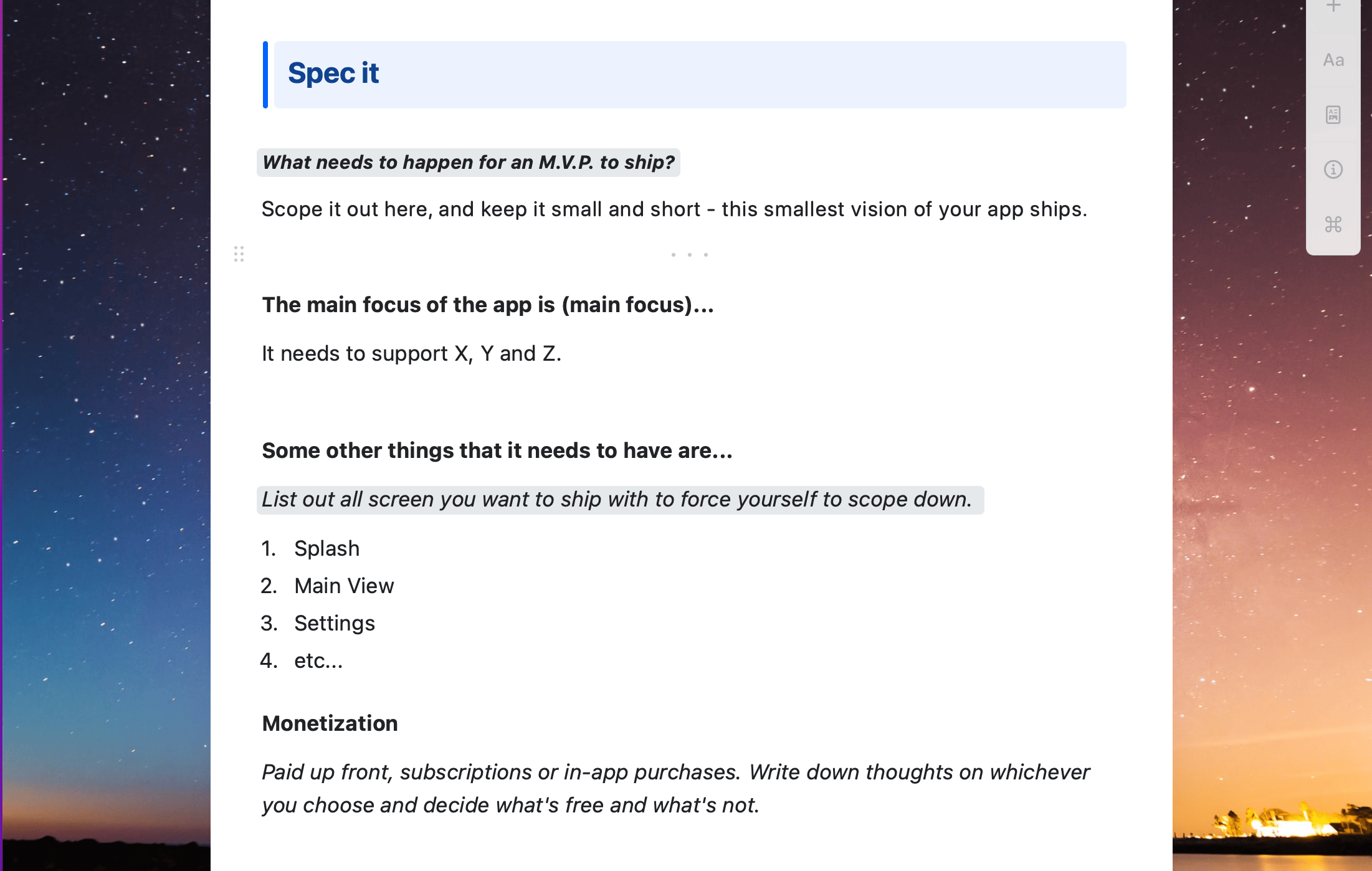 Design
This step is hit or miss for me, sometimes I skip it altogether. But, I may flirt with making a high fidelity design in Sketch for the app. It helps me really think about those “Well what happens when I press this” kinda situations.

Plus, I know the features I’m aiming for now. I’ve got an MVP spec’d out here, so by virtue of that - I also know what I’m designing. 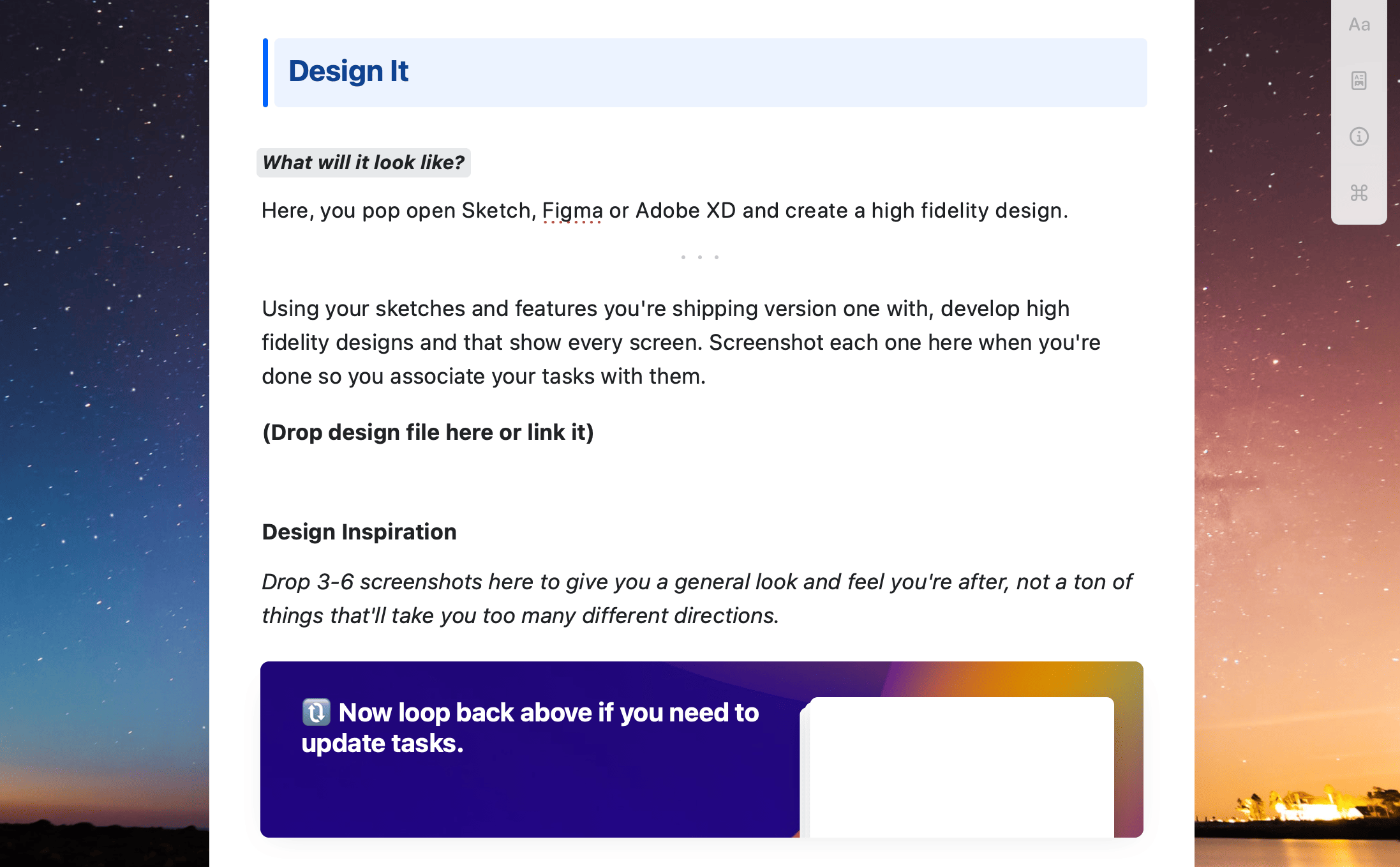 Build
Not much to say here - time to put code to compiler. 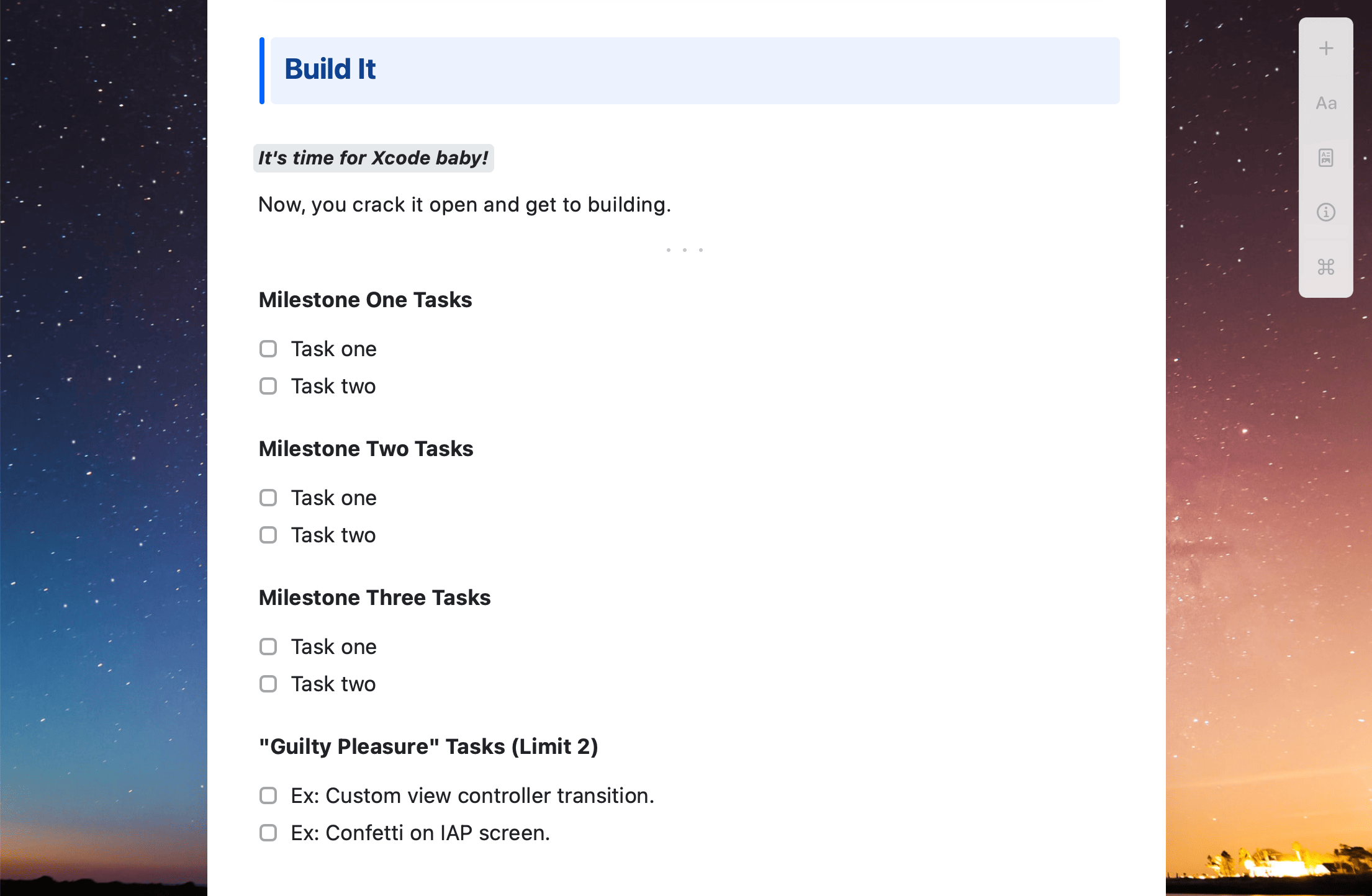 Prepare
The time between starting the project and launching it is a great time to get the word out. This step has some thoughts on how to do that. 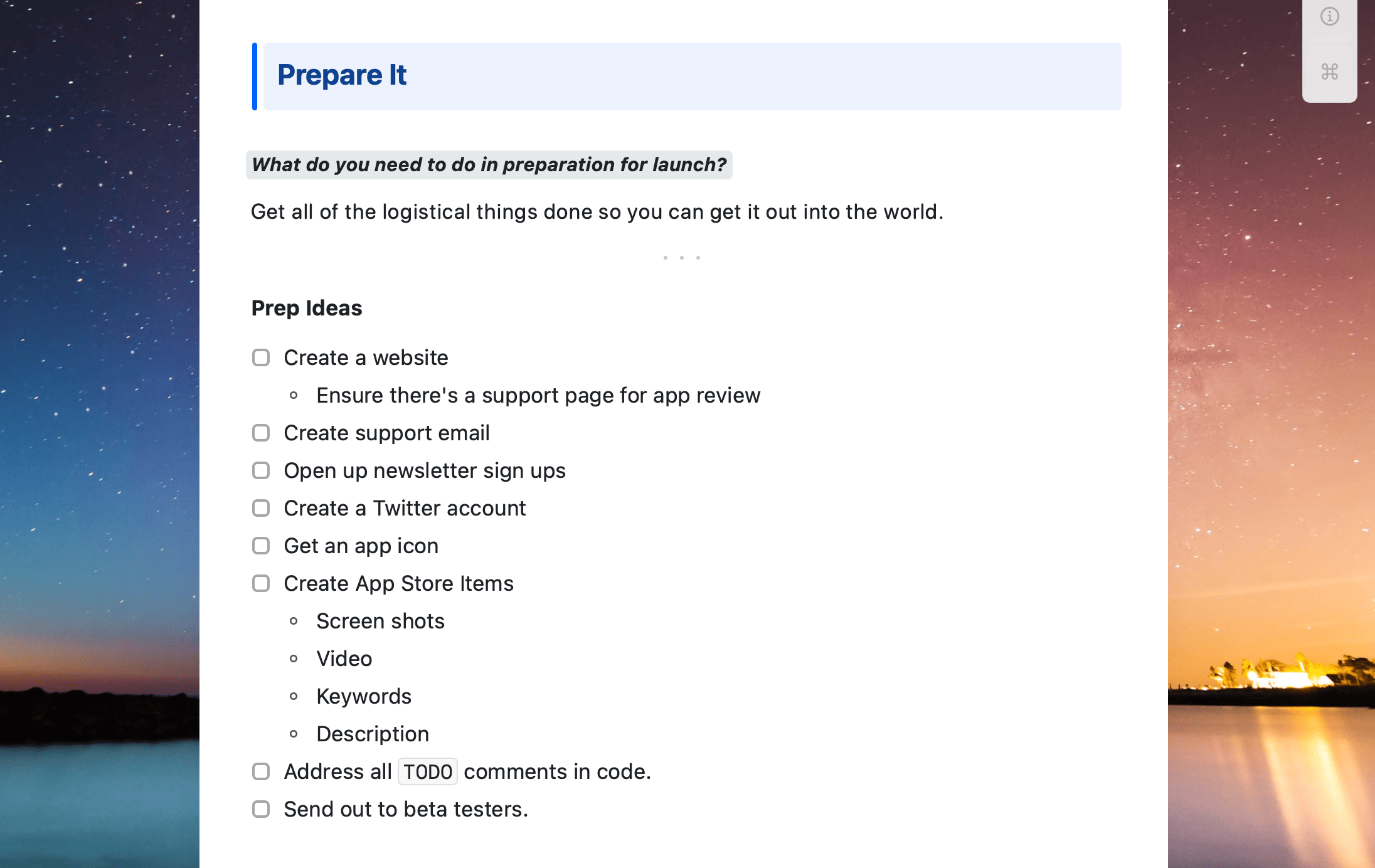 Launch
It’s here, launch day. I’ve got reminders covering things to do weeks before, the day before and day of. 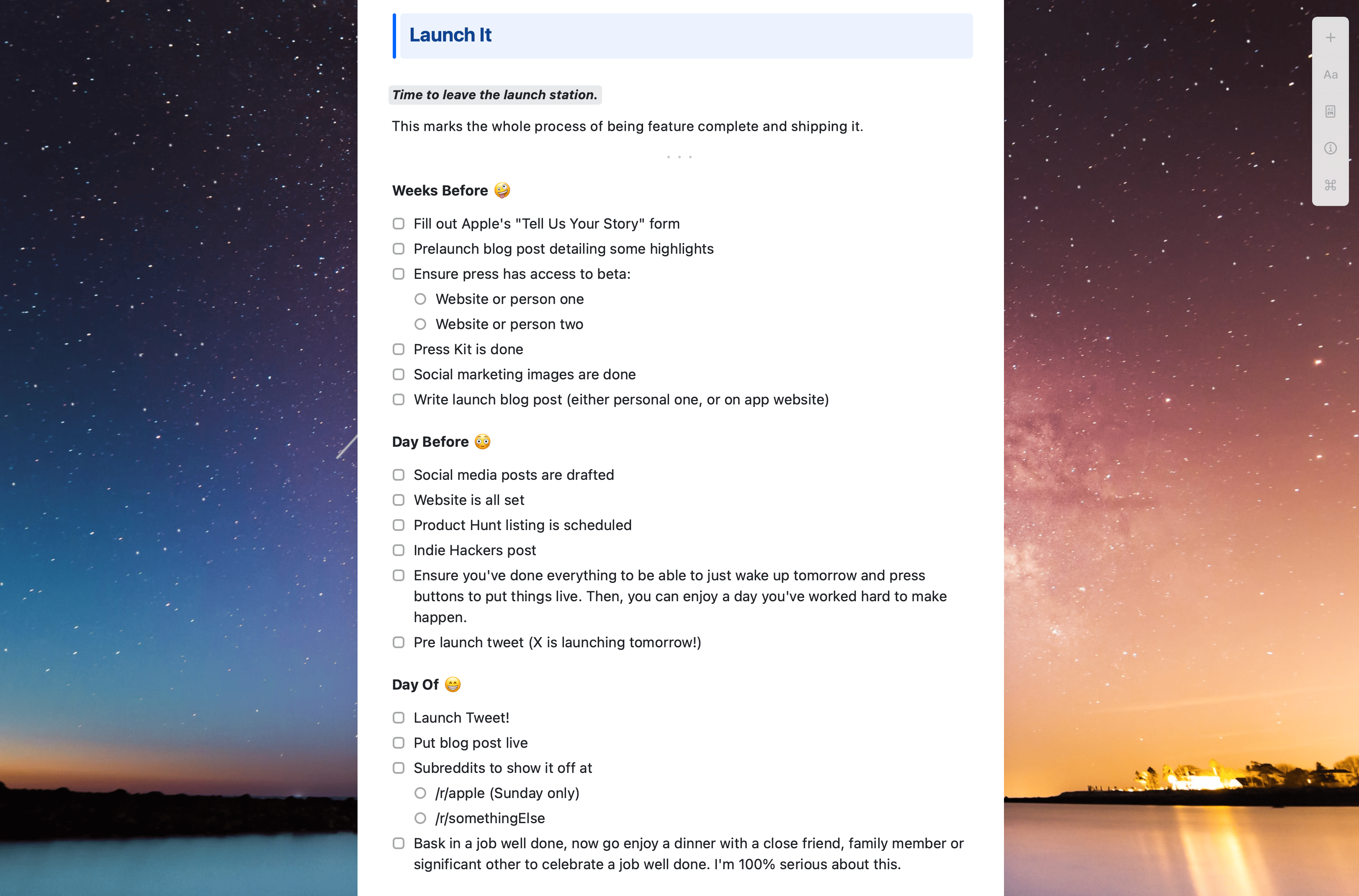 Going Forward
Here, you’ve outgrown this document. If all went well, you’ve got a new project to carry forward and improve.

I hope this helps! For some folks, a list of stuff like this in a template sounds stressful and rigid. For others, like me, I feel lost and frazzled if I don’t have a somewhat prescriptive set of steps to follow and see where I’m at.

← Typed Payloads in SwiftUI using NSUserActivity The Best Change to Come From W.W.D.C. 2022 →