Creating a Retail Demo for Apple

Through luck, determination and whatever other stereotypical noble quality you can conjure up, Apple selected Spend Stack to take part in their retail demo program. 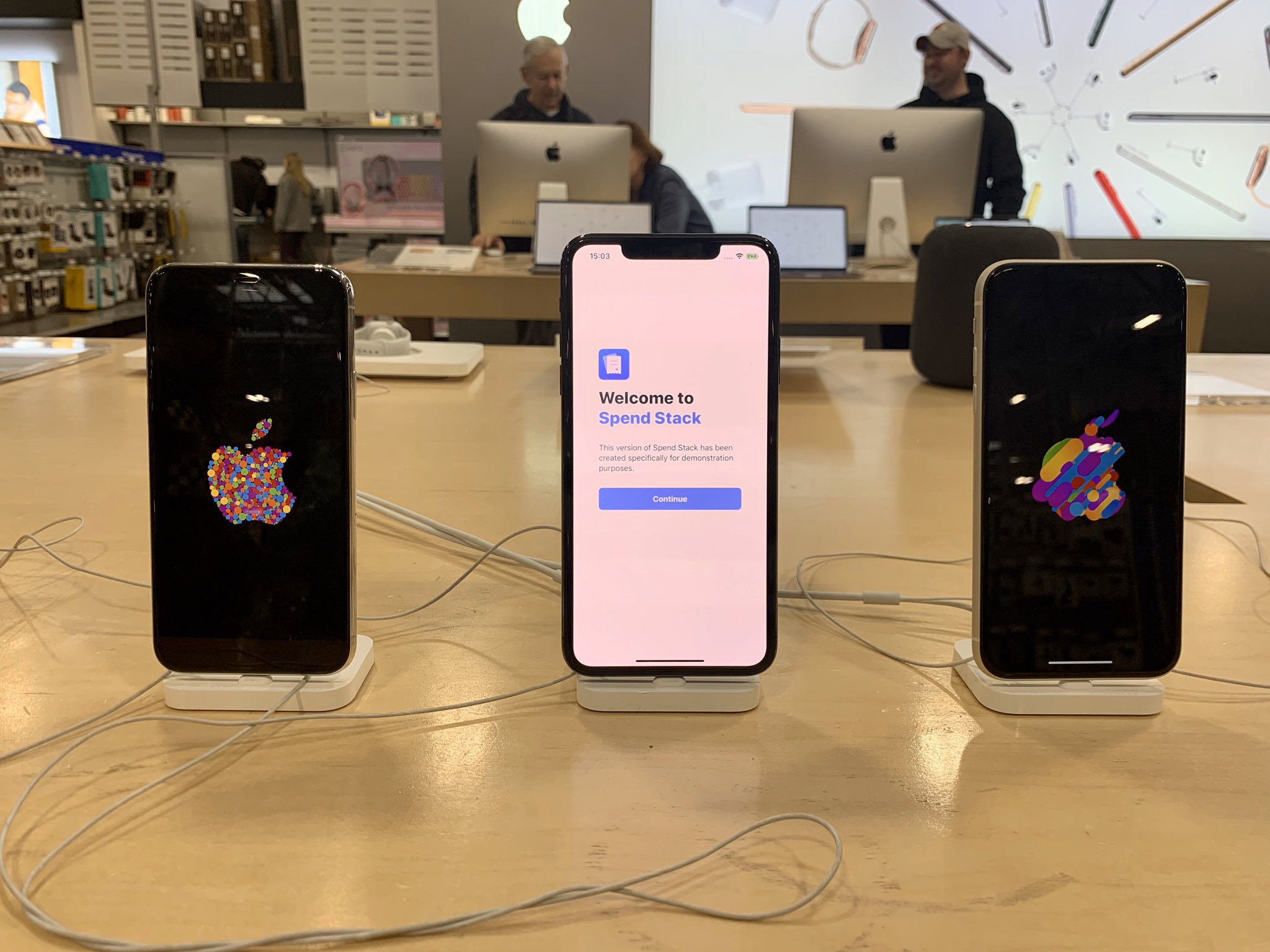 But, if you hit the Googles for past experiences with this, you’ll find quite a lot of tumbleweeds. This makes sense, because if you happen to scan the apps that are on retail iPhones and iPads at your local Best Buy, Apple Store, etc. - they tend to be apps that hail from Big Corp©. And rightfully so, they all are quality, well made apps with the team and budget to match.

Though, the everyman doesn’t often appear there. And if they do, it typically tends to be in the form of a game. So today, I figured I’d spend this indie dev diary chronicling my experience with getting Spend Stack on iPhones and iPads across America 🇺🇸. Think of it as Spend Stack’s official road tour 🚌.

Or, maybe more than America. I’m not really sure? I’ll get into that later, as we’ll see.

During some Saturday in December when I was hacking away at Spend Stack at local coffee shop, I noticed an email that stuck out. Its subject line spoke about an incredible marketing opportunity.

I thought it was spam 😅!

Thankfully, I took a closer look and saw the sender had a bonafide Apple domain. The message was simple enough. Someone from developer relations introduced themselves and laid out how the process works.

From there, you just dive into the ~15 page .pdf file they give you to point out the finer details. I will say, this guide was incredibly helpful. It had step-by-step pictures with call out glyphs to ensure you were getting logistical things done correctly (especially helpful when you get into the upload part of the process).

With my requirements in hand, I got to work! Luckily, this occurred over my Christmas break, where I am fortunate enough to take about three weeks off each year. I had quite a large update to Spend Stack planned for this time (which I’m in the middle of now) but the opportunity cost was worth the trade.

If you’ve spent any number of minutes with these demo apps at stores, you kind of know what to expect. A splash screen saying that’s it a demo, pre-populated data and some features that are either taken out or gated by an alert controller saying it’s unavailable.

In Spend Stack, all of this was easy enough. Instead of going through my designs and taking things out, I opted to keep them in so users would be aware they existed. I’d rather they hit a “You can’t do this in the demo” alert than be none-the-wiser to some pretty great features that are core to Spend Stack (i.e. iCloud sharing and collaborating for lists).

The splash screen was quick to whip up - I originally was using the one I have shipped now, but it was easier to rip it out to make a more “to the point” variation: 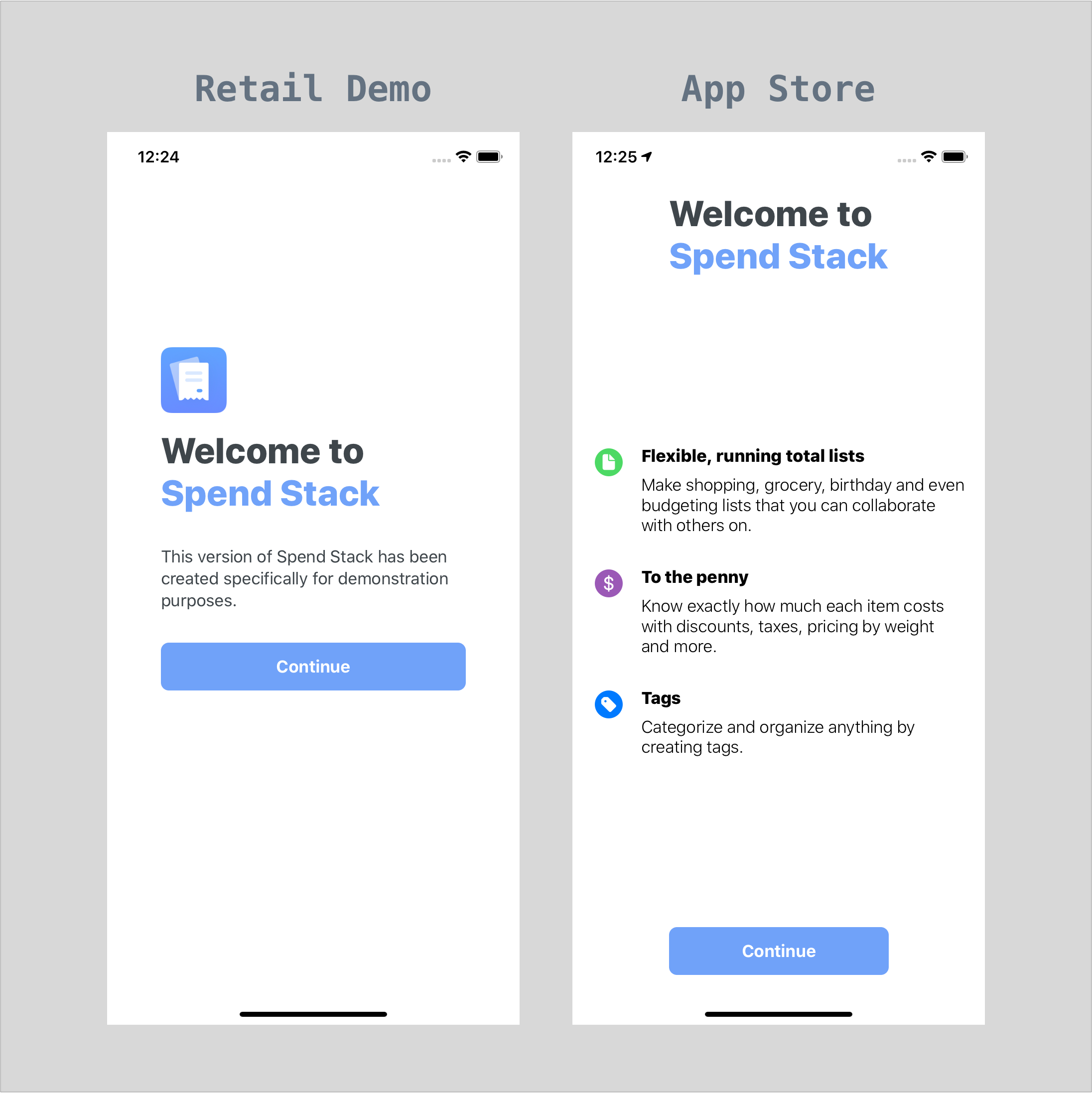 If anything, I probably would’ve taken out the “Continue” button, as I noticed quite a few apps don’t even use one.

I hit some issues along the way, though. The first and most challenging was around how I chose to tackle demo data. I need quite a bit of it. I wrote a list of lists (meta!) that I wanted to include to best showcase all of the things you can do with Spend Stack. I ended up with a solid line up, and each one was filled with relevant items, images, notes and more: 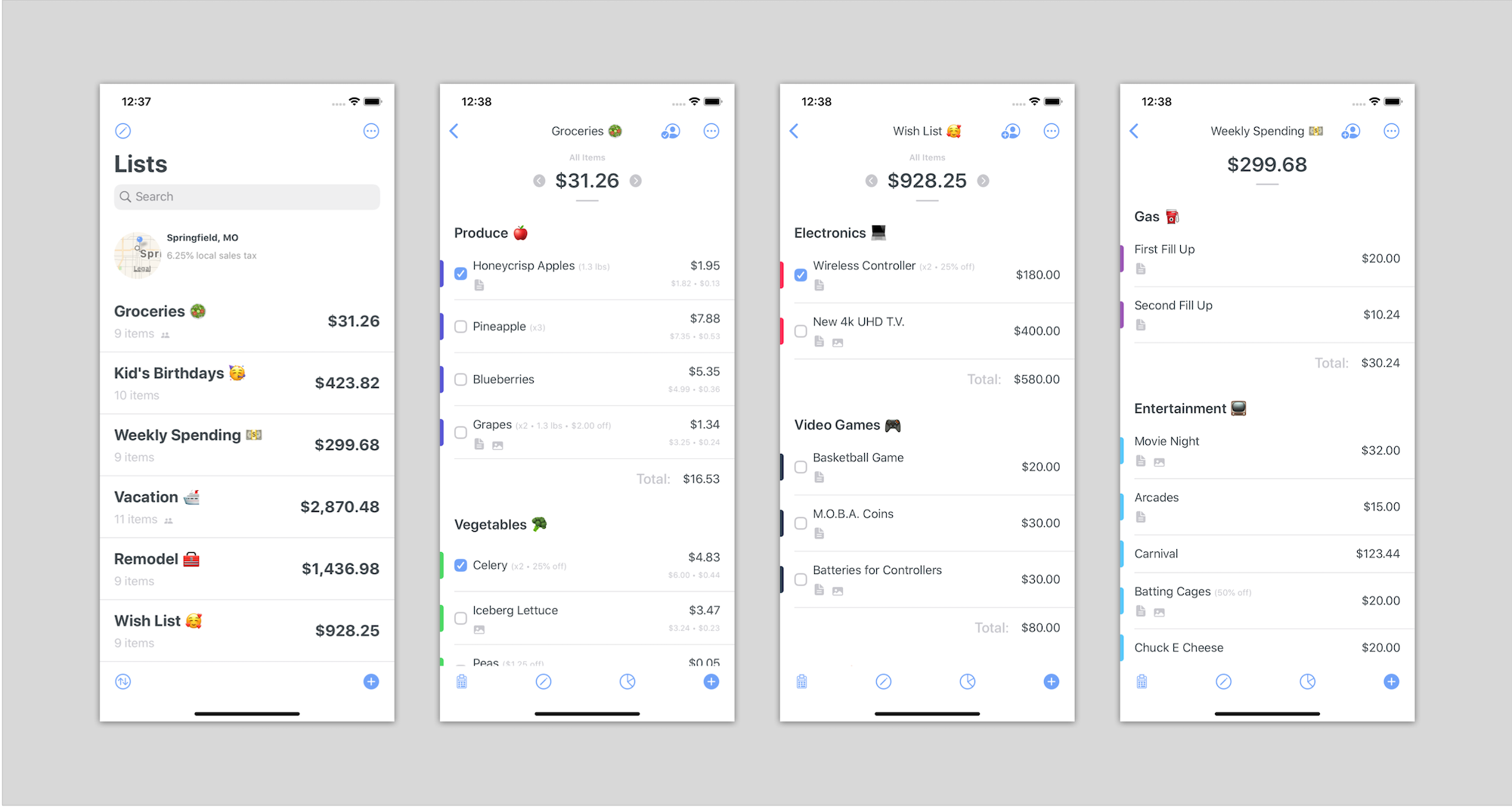 The issue was, I created these all in code for my first go around. And, well - it took about 5 seconds to create the database, drop existing data and populate these on the fly. That’s a non-starter, obviously, as nobody except my Mom and (maybe) my wife would wait around for that. And even then, it would only be out of love 😅.

I tried to turn some tricks with concurrency, but as is so often the case with programming - I stepped away from it and arrived at an answer. The epiphany came, and the solution was dead simple: simply ship the retail demo with a database. Spend Stack uses raw SQLite for data, and once I used the app and had a good set of dummy lists to work with - I simply found it within the file system on my mac and included it as part of the Xcode project.

The other hiccup has to do with multiple spaces on iPadOS. When you ship these retail apps, you’ve got to wipe any data entered on them when the user is “done” with them. Done is quite ambiguous, and there’s no concrete “when” defined. So, when a user backgrounds Spend Stack I reset everything:

The only fun thing is that when you open a new window, iOS also calls the same delegate method while the window is being setup. You can see this quite easily, and it makes sense I guess - iOS puts up that blurry view while another window slides in. So, I’ve got some jank there that I won’t share publicly to help avoid any deleterious state bugs 😅 (spoiler, it’s totally not a simple GCD delay, no way).

Aside from that - uploading it App Store Connect gave me some fits. Try to hide your surprise 😜. It’s a bit of a different flow, but again - the .pdf guide they give you really helped out here.

Once it was uploaded, all that was left to do was wait. I didn’t really get much information on when and where it would be. Was this like App Store promo art, where you supply it and it might be lost to the dark ether of the App Store editorial team (still waiting for mine to be used 🤞😭🙃) or show up next week? I had no idea, so I figured I’d just point blank ask them.

An email telling me to gate one more feature with an alert 🤣. But, I guess that did mean they were going to use it! Shoot your shot, right?

Getting responses was a little difficult to be honest, and in some ways frustrating, because to smaller indies like me - this is a big deal! This is getting Apple’s stamp of approval for your app! It’s marketing! Validation! The list goes on. I wanted to know I was doing everything they needed.

Look, there could be a million reasons for why things work the way they do on the App Store and these kind of things. It could be out of certain individual’s control. It’s always easy to bemoan X or Y on the outside.

I do know this - the rep I worked with was always kind when I chatted with them, and we cracked a few jokes back and forth. Plus, each person I’ve meet at W.W.D.C. on the App Store team was delightful, and the labs with them were a highlight. It feels like the key here is like anything else, you just need to build relationships to get things moving and I’m still working on that with the App Store folks.

About that Spend Stack news...

I’ve always said that my main goal was to make an app I’m truly proud of. While I’ve got a lot left to do, having Apple want @SpendStackApp on iPhones to demo their product is a huge honor for me and validation that I’m on the right track. pic.twitter.com/uSGhEbv8YL

If someone saw Spend Stack at the stores, maybe they would tell me and that would be how I found out it released. Thankfully, that wasn’t necessary.

Why? Because I straight up walked into Best Buy a few times a week to check (there’s no Apple Store by me, unfortunately). And, well - one day it was there!

There is nothing quite like walking into a brick and mortar store and seeing your own app sitting there on an iPhone. It really is one of those career moments that I’ll never forget. As someone who tends to be extremely critical of their work and a slight perfectionist, I find that being “proud” or feeling “finished” is always just another milestone away.

But as my wife noted, when I walked in there and saw it - I was unmistakably proud and fulfilled. She said my face lit up, and she caught some convert, candid pics to prove it: 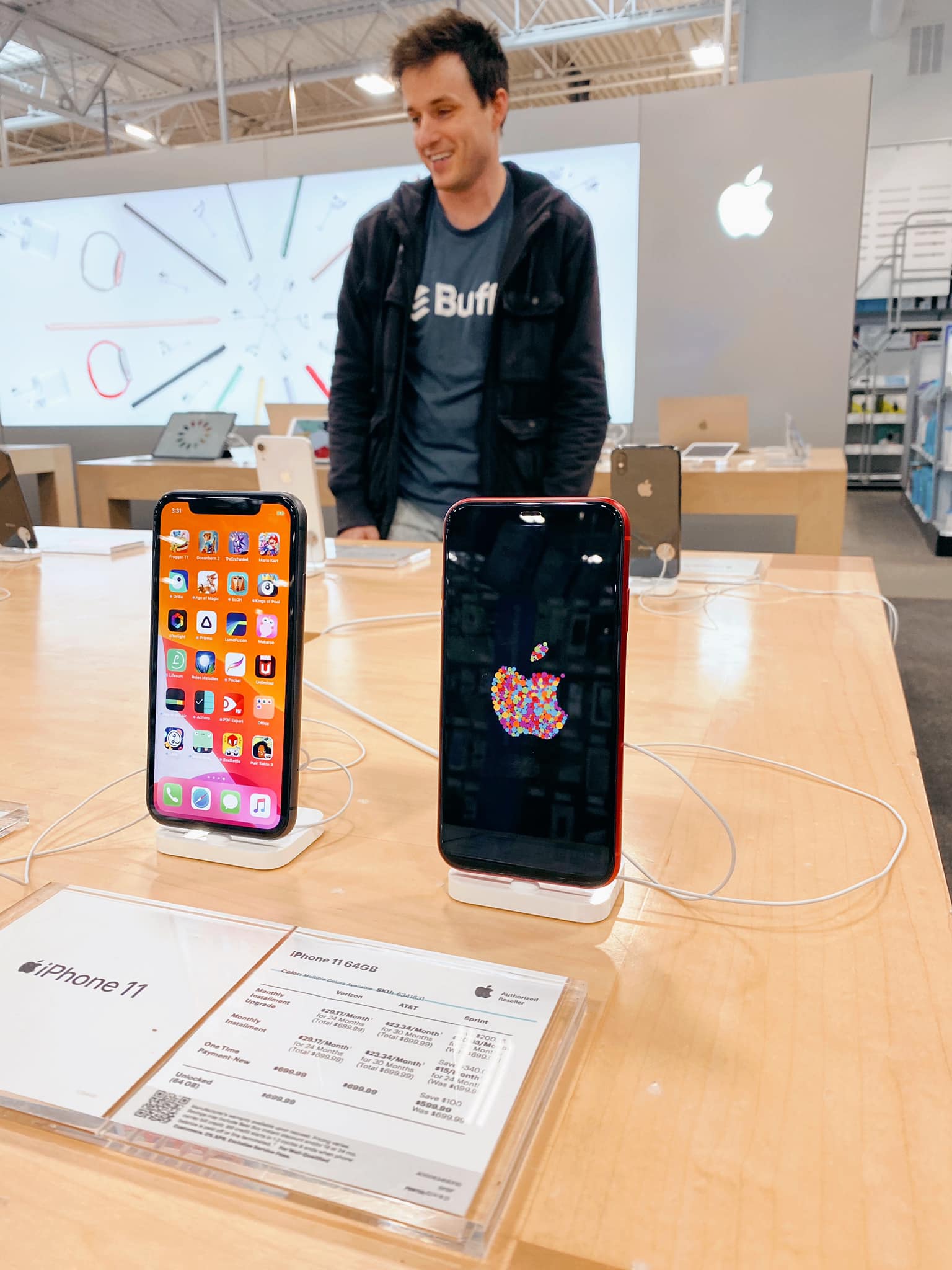 It was a lot of fun chatting it up with the Best Buy employees too:

They all were genuinely interested, and who knows - maybe I inadvertently created the first Spend Stack sales team 😎. On our way out, my wife and I decided to take a picture to commemorate the occasion. A kind gentleman walking by offered to take it for us: 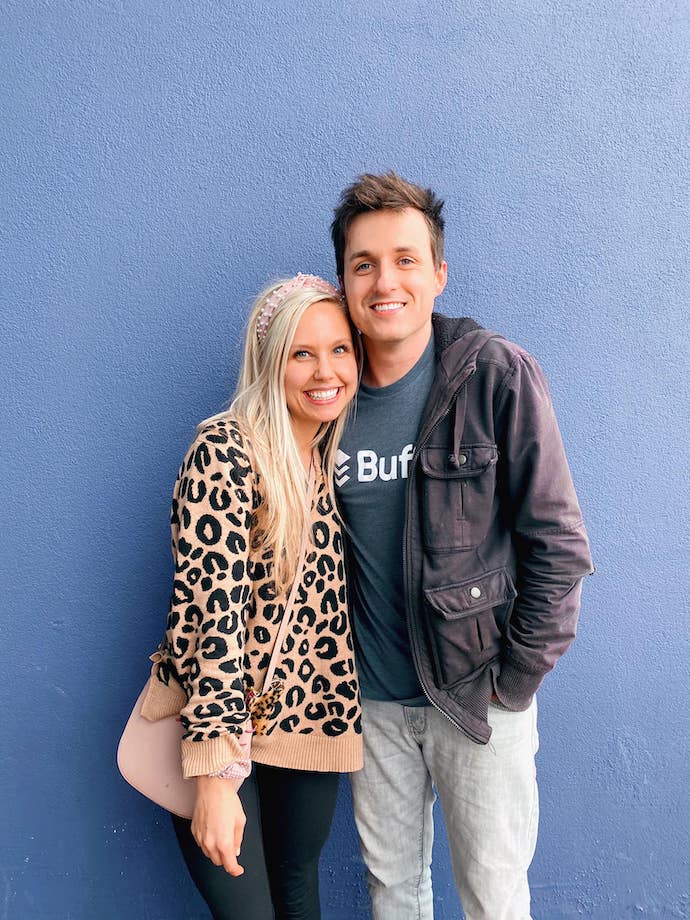 Why is that funny? Well, we’re obviously very happy in that picture. So another couple walking by asked, with a beaming expression:

Them: Oh my goodness, did you all just get engaged!?
Me: No, but Spend Stack got selected as a retail demo on the iPhones…

They cut me off, looked at me weird and walked away confused before I could finish. We still laugh about that 😜.

You never know where our little creations will end up. While you toil away night after late night, it’s too easy to end up in that phase of doubt:

I’m telling you, I’ve been there. And I have a season pass too, apparently. I revisit that space probably a little too often. You start to look at other apps and their success thinking that your own are always just a day late and a dollar short.

But hey! Sometimes you get the win! And when you do, be sure to stop and enjoy it. You never what’s around the corner, who’s paying attention to your app or when you’ll get a random email in December from Apple asking you to put your creation on thousands of iPhones with other carefully curated apps hand picked by them.

So keep on truckin’ on that next great app 💪!