Emerge: Optimize and monitor key metrics like binary size and startup time. See why companies like Dropbox and Faire rely on us.

Optimize and monitor key metrics like binary size and startup time. See why companies like Dropbox and Faire rely on us.

During what was likely a WWDC to be remembered for years to come for several reasons, we got our look at what’s next in Apple’s world. iOS 14 is upon us, so let’s dive back into our favorite(?) user interface framework, UIKit.

If you thought things were slowing down for UIKit in lieu of SwiftUI, well - that’s clearly not happening. There’s a lot to cover this year!

If you want to catch up on this series first, view the iOS 11, iOS 12and iOS 13 versions of this article.

First, let’s look at the free power ups. And nothing really embodies that more than the completely overhauled date picker. It went from serviceable to fully-featured.

With just this code alone:

For the most part, you just leave UIDatePicker alone and let it use the default style choice, .automatic. Though, I do see value in checking out the trait collection to swap between that and the new .inline style:

Regardless, if you’ve got the .inline display, the picker will still do this context-y menuish transition to the full style as seen here:

The pretty package comes with some house keeping, though. If you were using a date picker before, you were likely doing so under the assumption that it would show as the wheel style. If that’s the case, it’s gonna look all kinds of crazy right now - so go check it out in your own apps and either tweak the style or the way you’re showing it.

For example, I was using the wheel style in Spend Stack, which you can see in the picture above in this article. However, building against iOS 14 nets me this result (with the nice, fully fleshed out version showing when a user taps on it): 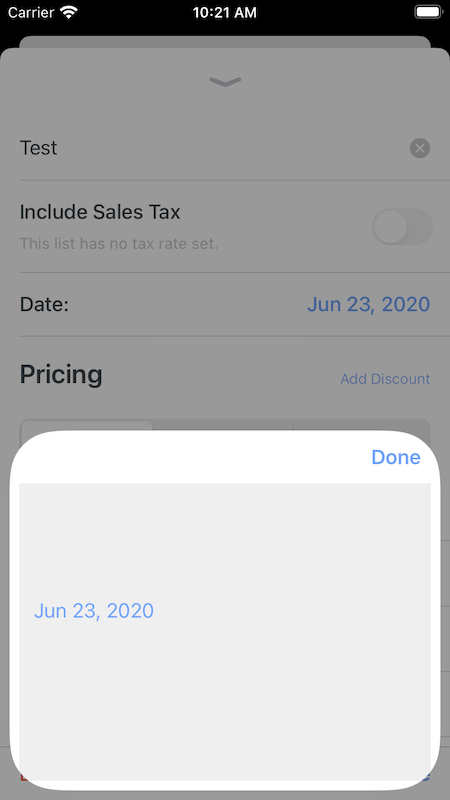 There isn’t so much to say here, other than it’s simply about freakin’ time. Using a color picker is UIKit-101 fare. You present the view controller, set a delegate and move on with life:

Which nets you this:

But hey - the selected color is also .KVO compliant, so why not mesh the old with the new and Combine it instead of using a lame delegate, amirite?

It seems Apple’s love affair with UIAction has a pointed purpose - it’s simply used all over the joint now.

Which is great, because you know what feels incredibly tedious to do in 2020? The target-action pattern.

It was birthed in the days of yore and fits Objective-C’s message sending paradigm extremely well - but whether you love the dino or hate it there’s simply no denying Swift is where the puck is going.

As such, we can go from this:

It’s hard for me to overstate how much better this approach feels. In some ways, it reminds of when the alert controller started supporting its block based approach as well. It’s chef’s kiss.

This means it’s now trivial to make the following UX demoed in the UIKIt Catalog for its toolbars: 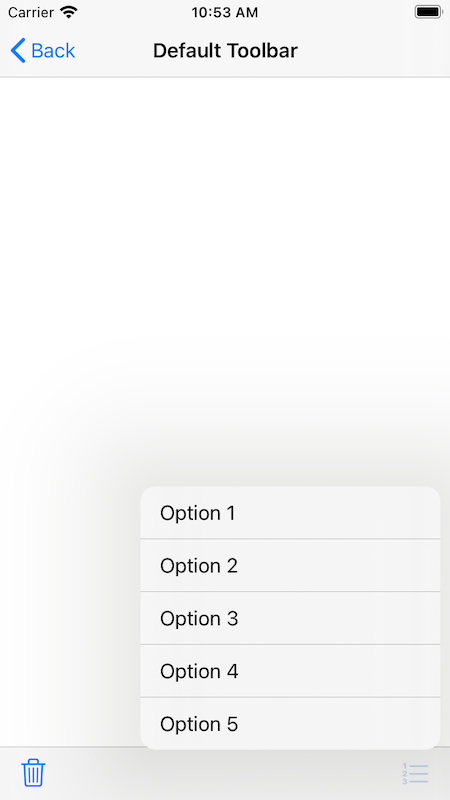 Which is a good thing, because that type of thing seems to be pushed in favor of action sheets. In fact, you can pretty much toss a UIMenu or UIAction in just about anything in UIKit such as buttons:

Now, the button will toss up the ol’ menu:

There is a whole new way to configure what are now called “lists”. For example, you can make what’s basically a table view with a content list:

There’s a new UIViewConfigurationState which, in turn, a UICellConfigurationState inherits from. These all play a part in the updates to how you can setup cells in both collection and table views, which I suspect will be the main topic in “Modern Cell Configuration”

Look, UISplitViewController went absolutely nuts in this release. Just look at the diff: 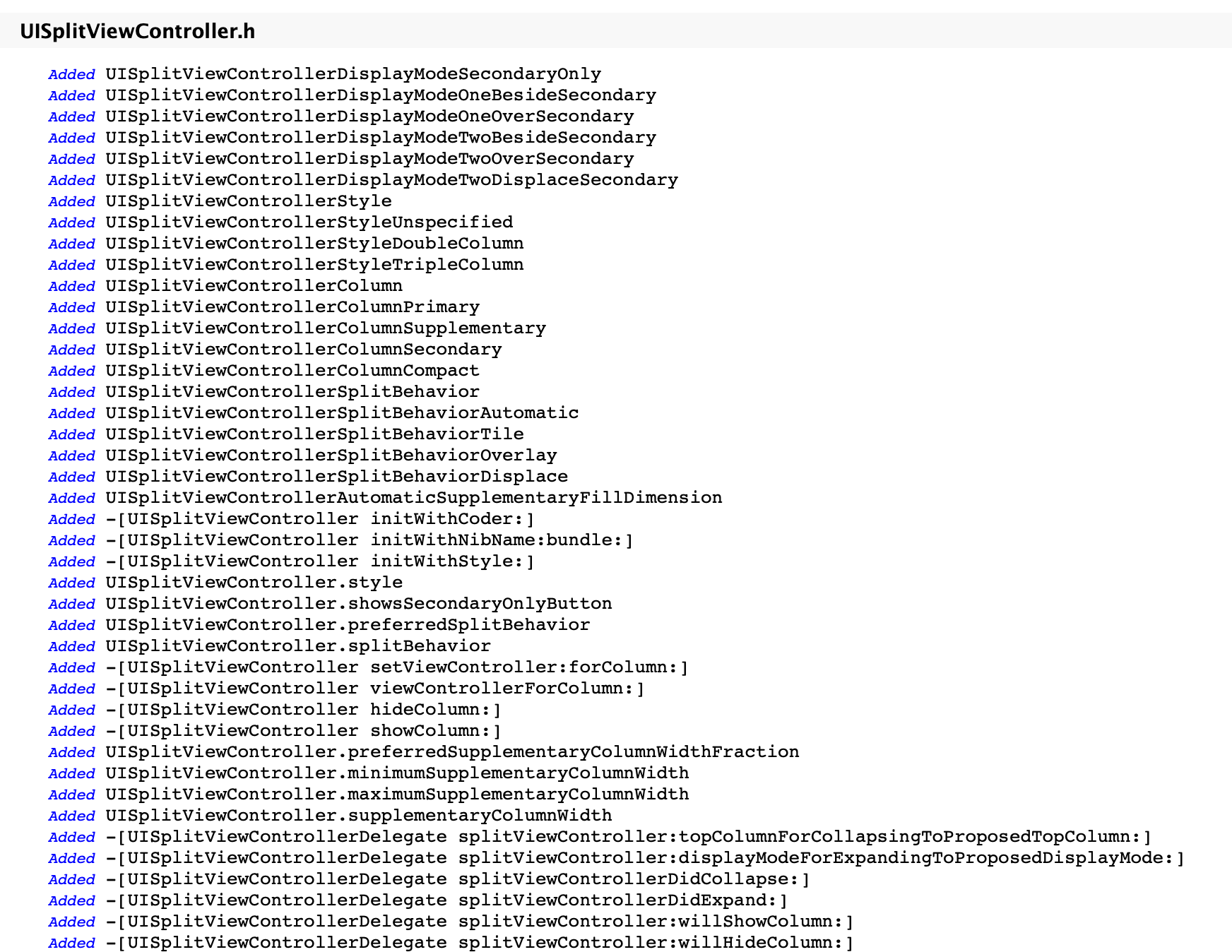 One reason why? Due to the new .sidebar stuff which allows for a three column layout. You see this all over in iOS 14 - for example Mail and Notes. And now, we’ve also got the whole new list thing going on in collection view. That’s used heavily in the sidebar world.

But how do we handle all of that collapsing tomfoolery? Won’t that be a nightmare, even with diffable datasource?

No, of course it won’t. You can diff things section by section now: 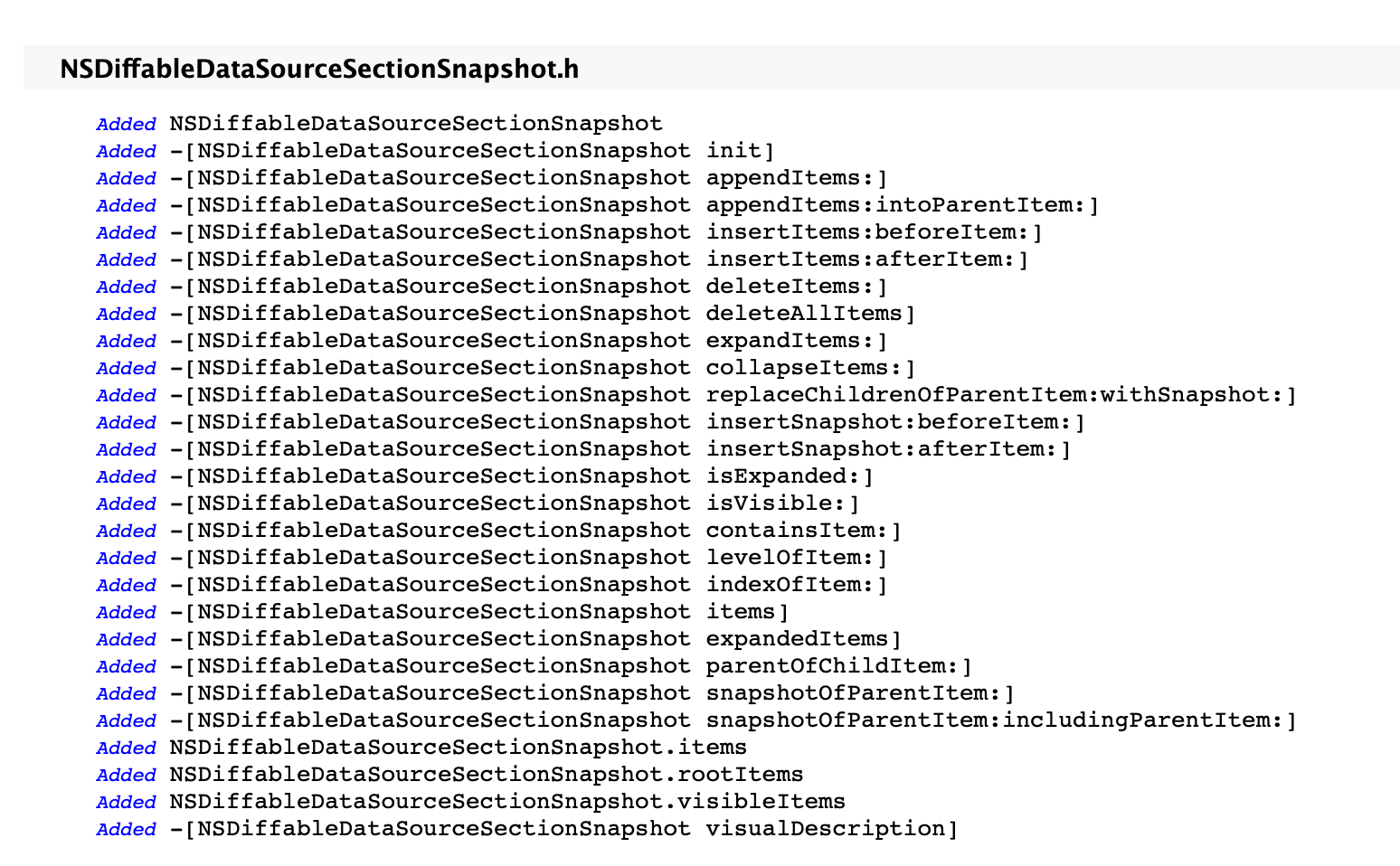 You put it all together, and collection view with split view controller just became a go-to choice for many app’s UX.

Much like drag and drop and cursor effects work, there’s a new interaction for the scribble mechanisms found on iPadOS. The good thing is that you don’t need to do much of anything - as stock UIKit controls get the scribble stuff for free.

But, if you’ve got something more custom or need to have more control due to your own situation - doing so is easy enough:

It’s great to see Apple leverage similar API across the board now with these interaction delegates and UIAction being used across the board. If you figure out how one works, discovering the rest is easy.

Optimized for mac? That doesn’t outright say it is a mac app. As more releases follow, I suspect the lines will only get more blurred as to what a mac app is anymore.

UIKit got some serious juice in this release. I suspect it will for a long time, as SwiftUI is simply putting similar controls under its own wings in a declarative way without even needing a representable instance for a lot of these things.

Plus - my wish came true. Catalyst apps built on UIKit look better already on macOS by virtue of Apple’s new design language that bring the two closely together. I’m down! As always, it’s been my pleasure diving into UIKit’s diffs on an annual basis. There’s a lot to love here.