I think Death Cab for Cutie put it best:

So this is the New Year / And I don’t feel any different.

I’ve danced with the whole “new year, new you!” concept more times than I care to count. Now, at age 31, I feel like I’ve finally arrived at a point where I can actually reflect on my year and make changes to get things done that I want to accomplish.

This is big as an indie dev, because without a system in place Spend Stack simply would not exist. Why? Because I have three kids under six, am married, have a full time job, an indie app, a blog and, well, my own hobbies. I used to think time was too short, or there simply wasn’t enough of it. However, with some tweaks, I truly believe there is enough time in the day to live the lives that we want if we have the right habits to support it.

After many mistakes, I know that if my day doesn’t have structure produced by some recurring habits, it gets lost in life’s many responsibilities. Today, I’ll share the system I have in place, and the apps that help support it, that have helped me form good habits.

Years ago, if someone had told me to forget setting goals in the name of productivity, I’d call them mad. But I’ve since changed my thinking on them. As evidenced by books such as Irresistible, Make Time and Atomic Habits, the problem I’ve found with goals is that you stay on the hamster wheel.

Accomplish one, then another immediately follows.

For me, I need a smooth, constant feeling of accomplishment, and goals give me peaks and valleys. I’ve certainly found I admire goals much more than I enjoy them, so I’ve taken their good aspects and tossed out the rest instead of following another hackneyed goal system I might come up with.

These days, I’m all about forming a system in my life to become the person who would accomplish the goals I want to.

But in 2020, talk is still cheap. I need concrete methods to carry out a plan because hearing it and doing it are two different things. To that end, I’ve found that if I discover who I want to be and what major themes I want to accomplish - I can then formulate smaller goals from that information.

At that point, I mostly disregard them and come up with a system to help me become the person who would be likely to routinely do those things.

The TL;DR - For me it’s less about setting goals, and more about working backward from those goals to become the kind of person who would do those things by getting “1%” better as often as I can.

Here’s how it works for me.

The first step is laying the foundation. Who am I, what am I about? What’s important to me, and what do I want to be known for? To help answer those kinds of things, I have an evergreen journal entry in Day One that I read each morning to set my frame of reference:

The information in the rest of that entry simply states things I’d like to do at a more finite level. The key is that I may or may not do some of these things, as I’ve written a generous amount of tasks down. So, the idea here is that having them front and center will help me remember the person I’m trying to be. This way, I avoid only thinking in terms of arbitrary boxes I’m trying to tick off in 2020 which would only lead to yet another set of boxes to check off.

To get to this quickly, I’ve set up a trivial Shortcut that opens its respective URL: 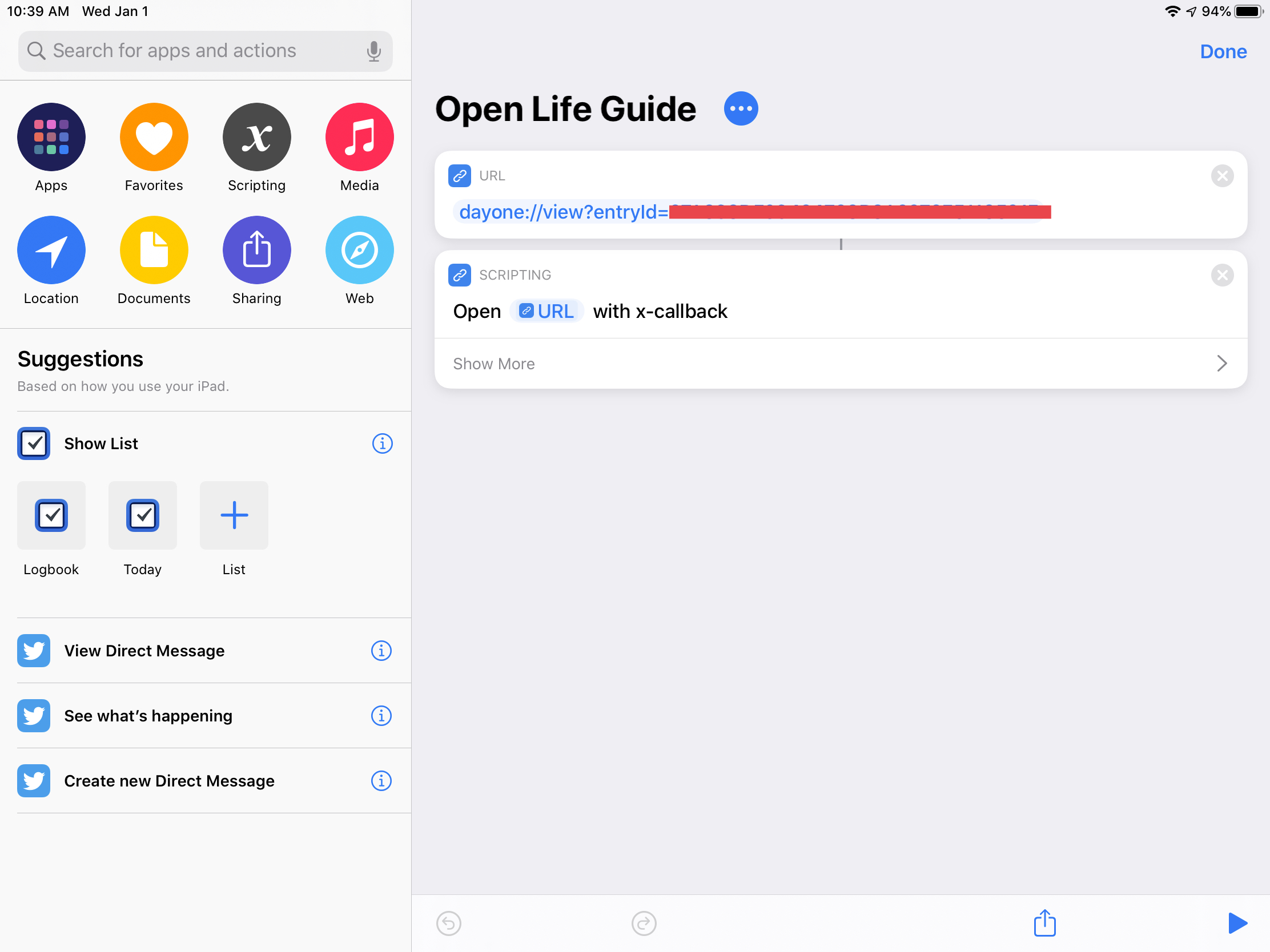 If I read a simple document written by myself to give me that North Star (a concept I’ve talked a lot about) for my life, I feel centered and my mind is a bit less cluttered.

Once I’ve read the “big idea” though, it’s time to shift my focus to the day to day things.

Things I need to do every single day are what I call foundational habits. This is the part where it becomes easy to make things far too ambiguous, so I’ve sectioned off foundational habits on an app by app basis, each one representing different domains of my life.

Streaks is what I use to remind myself to do certain things each day of my life. I even order them in the same way I typically go about my day: 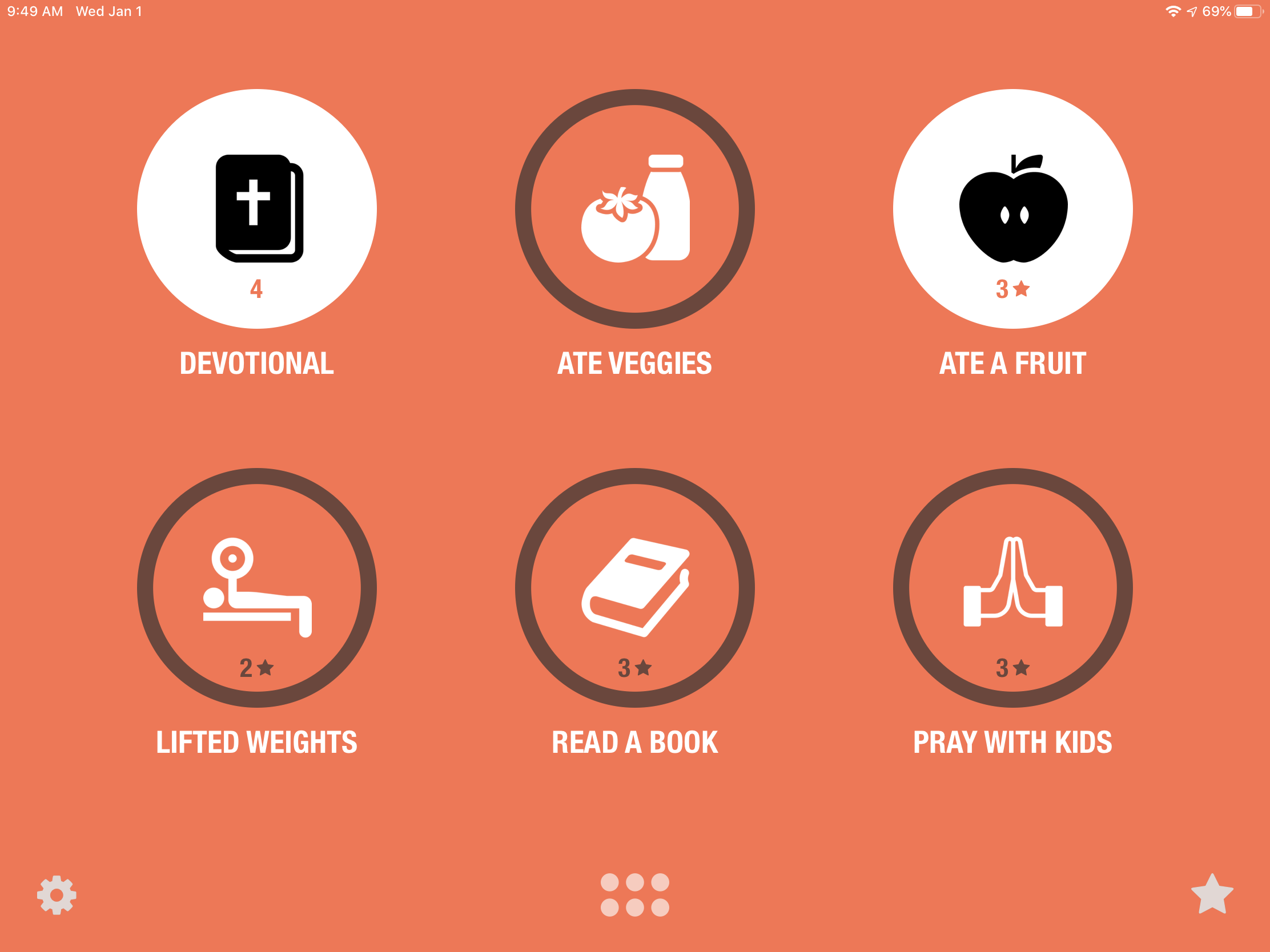 There’s a reason this has snagged one of the coveted Apple Design Awards - it’s simple to use, engaging and does one thing well. So I lean into it and try not to make it anything other than what it’s trying to do. An app that helps me do six things daily.

So, ask yourself, based on the “big ideas” you have for your life - what things should you be doing, or want to do, daily?

However, daily tasks are stringent by nature. We all have those moon shot goals in mind. Or, we simply have a bigger highlight (a term coined by the aforementioned Make Time book) that we want to tackle over one or more days.

For this, I turn to Things 3. Here are some examples of things I’ve recently put in Things (zing!):

Clean out the entry closet, take items to Good Will or shoot hoops with my son - these are all great things that support who I want to be but aren’t likely to repetitive daily items. So, that kind of item goes here.

With daily tasks and highlights accounted for, we now get into the menial tasks.

Life has so many responsibilities, and for the “remember to take out the trash” or “pay my personal property tax by December 31st” kind of things I use Reminders. The key here is that these kinds of entries are either family-related or just plain “adulting” tasks: 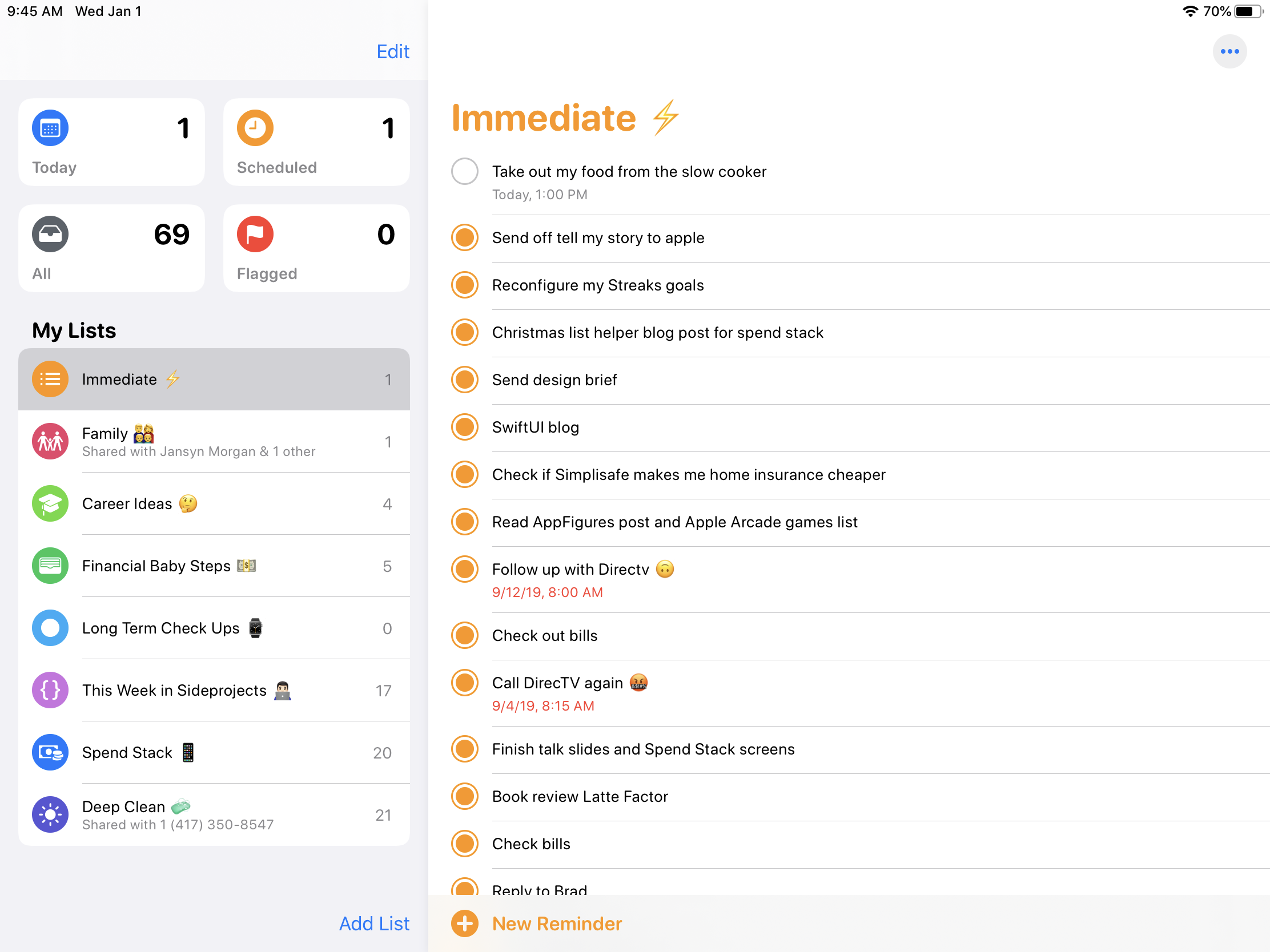 Since its iOS 13 overhaul, I’ve found Reminders to be even more component. I’ve always been a fan, but with its new features (such as grouped tasks) I’ve been able to lean on it even more.

Further, this is the only tool I use for side project or Spend Stack action items.

Because it’s beautifully limiting. With so much happening in life, I found that if I opened up super tools (such as Github Issues, Asana or something similar) I would write a novel and likely not ever return to read it again. But Reminders is short and unforgivably terse.

This is a perfect set of restrictions for me, and I’d imagine it’s the same reason a lot of creative folks produce breakthroughs under a certain level of rigidity or constraints. It forces only important ideas out. For the higher-level stuff, I use Notion. For the Do X and Y stuff, I use Reminders and love it.

For reference, here’s a recap of the apps I’ve mentioned:

Depending on your personality type, my system may sound like the most stressful thing since taking the ACT. That’s ok, my wife fits into this category. She’s a more of a “go with the flow” gal, and she balances me out in many ways.

But, if you’re laughably Type-A like yours truly, having everything in its place and place for everything is simply invigorating and habit forming. While this may appear on the surface as too many tools to use - they each are serving a simple purpose. And that removes any ambiguity from my head, which helps me form the habits I want to.

Over the years, I’ve discovered one truth when it comes to habits and the likelihood that I’ll achieve them - it’s about the 1% wins. As James Clear noted, the same way that investing in your 20s leads to riches through the magic of compound interest, so to do 1% habits in your day to day lead to compounded results over time.

In the end, that’s all my little system does. 1% wins help me learn from the past, produce in the present and prepare for the future. If my goal is to write a book, I don’t write that down as the thing I want to do. Instead, I need to figure out what to do to become a writer. May you have an amazing 2020 in accomplishing all of your aspirations, and heres to better habits 🍻!

Xcode Previews for SwiftUI has quite literally changed a decade old workflow. Here are the techniques I currently live by.