There’s a term, and I had never heard of this before, called “grief ambush”. It works like this: You’re just going about your day and things are normal. Then, out of nowhere - BAM! - you get this gut punch of emotions that takes your breath away. It happens while you’re navigating exceptional circumstances, and your thoughts idle away trying to make sense of your situation until their fight-or-flight mechanism kick in: 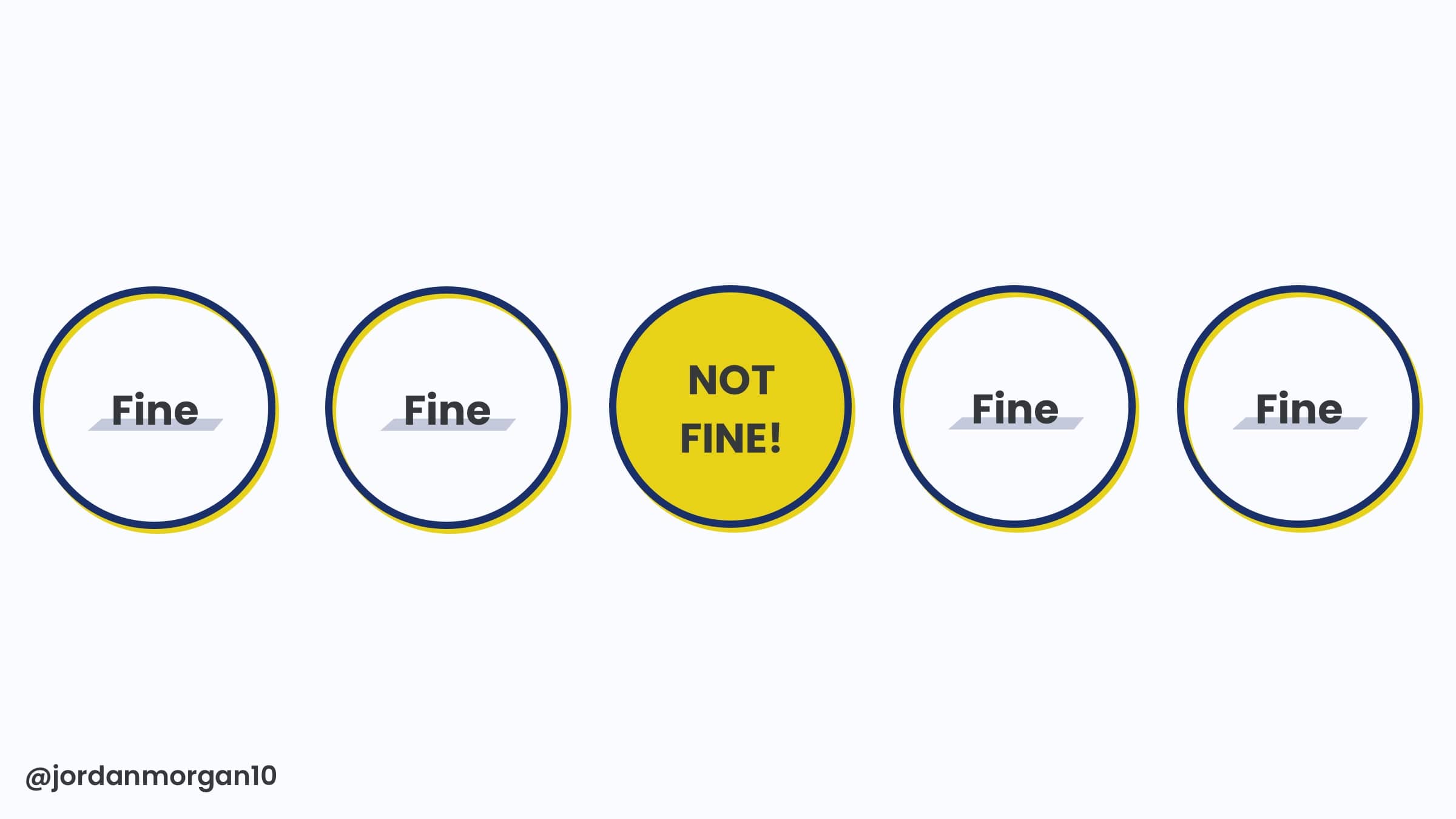 For the past four months, I’ve been dealing with some super odd medical issues - and I’ve run the grief ambush gamut. The timeline to even describe things at this point has become so mutated, shifted and varied that recounting things has become somewhat difficult:

Needless to say, it’s been four months of at least 12 rounds of labs, tests and probably some other things I’m forgetting. I’ve shifted back and forth from “I think I’m okay” to “Wow this is still scary” more times than I can count.

But the big one? That big scary C word. When my bloodwork had shown signs of blood-based cancer - the time between hearing my doctor say as much and awaiting the test to either confirm or deny it were the longest six days I’ve ever lived so far.

And that’s where the grief ambush hit, two times in particular. The first time was a late Thursday night, after we got off the phone with my doctor. We went to a pharmacy to get some medications to help with my newfound anxiety. Lucky for us, a friend owns the pharmacy and they stayed late so we could get it. After we picked it up, I just got smoked by grief. I simply had to get out of the car and fast. As I opened the passenger side door, I quickly sunk down to the pavement crying my face off, “I don’t want to have cancer!”

In retrospect, I mean, who does?

The second time was when I went to the hospital to get my first flow cytometry test (via blood draw). At this point, I had become somewhat of a familiar face with the phlebotomists.

“Hey man, why are you back here?” one of the younger ones asked.

As they strapped on the tourniquet, I didn’t know how to answer non-awkwardly:

“They think I might have cancer”, was my reply.

And then another ambush! I started crying again as the needle stuck me, wondering out loud how this could be happening to me (“I’m young!”, “I’m healthy!”, etc). My sweet daughter crawled up on my lap and gave me a kiss, that was both terribly depressing and so lovely all at once.

That takes me to now, today. My story, thankfully, should end up being a happy one. One of those “cancer scare” stories. Others aren’t as fortunate. My hematologist believes this is a viral process my body just has to work through, and it simply takes time to level out. It’s as if COVID devised some sort of twisted machination, wherein my labs aren’t terrible but aren’t fine, stringing me along in hopes of a normal result the next time. So for now it’s labs once a month, and we’ll keep an eye on things. Could be worse.

So why am I telling you all of this?

Aside from the fact that I’ve not been one to shy away from personal topics, I learned a lot about myself while navigating things. Particularly, during those six days I awaited the results to see if I had cancer or not. And you know what?

I came away extremely proud of what I found. It literally dawned on me, this realization (shared below) is what let me be okay while I wasn’t.

While wondering what was going to happen to me, I had to face reality that I might be battling cancer soon. And, once I did that, I had to also consider what could happen if I did. Namely, I could die. Sure, that’s going from step 1 to step 10,000 - but that’s what your mind does in these things.

If you were to find yourself in the same situation (or you’ve had the misfortune of doing so already), what would you think? I had the hallmark movie moment where I had to recount my life and the choices I’ve made up to this point.

I was relieved (and somewhat surprised) to conclude that I found no cause for regret, and given the chance - I’d run it all back the same way.

That’s a huge gift in a circumstance such as this, and it was the one thing that really helped ease my mind when things weren’t alright.

Imagine getting a terrible diagnosis, and then your very next thought is something like this:

Can you imagine? That’s trauma stacking, and your mind can barely handle it all.

It begs the question in my own mind, and the long-winded point that I’m trying to make now that I’m on the other side - why and how did I approach things up to this point such that I felt at peace if it all ended tomorrow?

Let's also be clear - I never bat 1.000 on these things. I've made a bevy of mistakes along the way, but that's not the point in this post. But rest assured, I'm no self-help guru. I just want to share a pivotal realization that brought me peace in an unpeaceful situation in hopes that it helps out anyone else.

I’ve found that it’s two fold. The first reason I can think of is this; I’ve lived my life largely behind a mantra of “The main thing is to keep the main things, the main thing” and you’ll be ok. What are my main things? Straight from my Day One journal, they are:

Those are the things I value most in life, and in that order. Which is extremely important. Your list could look similar, maybe some things are switched around. Maybe it’s totally different - perhaps none of my things would be on your list.

The bottom line, though, is we all live by some sort of code. I’m glad I realized this before it might’ve been too late. Because a lot of those things, while important, can be put on hold. Some of them can’t. Knowing which ones are which saved me a lot of heartache.

So, secondly, from within that line of thinking - there falls two categories of things that I value:

Things that fall into category one for me are items 1-3. Those can’t sit and idle. They have to have attention and intention every single day I live, or my value system gets all out of whack and I no longer feel a mission or drive behind the things that I do.

Things that fall into category 2 are items 4 and 5. They are second, and while they are extremely important to me and they matter a great deal - when it comes to a hierarchy they can’t overtake items 1-3. Where I can get into trouble are times when I had them flip. Those were stressful times in my life where I might’ve got just one more line of code in instead of going outside with my kids, or skipping a date night to get some work in.

For me, it’s key to keep contextually important things just that. They can’t overcome your consistently important things. It also gives you the freedom to say things like “Yes, side projects are important to me, I enjoy them and value them” instead of merely responding to inquiries about them, like you have to include some sort of asterisk or explanation about why you value this that you love doing.

I don’t see any sense in that. Give yourself permission to pursue the things you love doing, and realize that order those things should be in. In my journal, I organized my goals around this idea, which I privately coined “top-down living”. Where the important goals are first, and then they ladder down to the next ones. That’s a post for another day.

Since this is, of course, Swiftjective-C, this all ties back into indie life 😉. I really hope that you are enjoying some Xcode project you’ve been kicking around, or have been hammering away on that blog post you’ve been thinking about. Those are awesome things and you should enjoy them! Please, do!

But at the end of the day, if you get some crappy news, you won’t even think about them. You’ll think about the people you love, the impact you had or the legacy you’ll leave. For me, my indie endeavors, while important and completely deserving of some of my life’s mindshare, will remain in the background - where they should be in grand scheme of things.

This stuff, it’s wildly fun for me. But, not at the cost of things more important. I often get asked “How do you have a blog, apps, write a book or whatever else with a family and kids?” and the honest answer is - I don’t. I do all of those things outside of them, and only because I love doing it.

But as I’ve gotten older (and dare I say some permutation of wiser) I’ve realized that if my son taps my shoulder, or my wife wants to watch the same show on Netlix for the 1,000th time - I’m freakin’ there. My laptop stays tucked away, awaiting our next adventure in my backpack. And I’ve never once regretted that1.

One of the weirdest conclusions I’ve drawn from this experience is that to me, the thought of dying wasn’t scary. It was sad. I don’t want my wife to be alone with three kids. I don’t want my oldest to hang up playing ball because it would remind him of me, or my middle child losing his infectious laughter due to confusion. Or, my young daughter growing up with only a slight, vague memory of our time together.

But, if it did happen, I would be ready. I’d take my last breath on this ol’ rock filled with gratitude for the time that I’ve always given them. Or the dates I always took with my wife. And, absolutely - I’d be proud of the software I created, the words I’ve written or the impact (however small) that I’ve had.

But, I’d be proud of them in the right order - and that’s what counts.

As I near a major milestone of $100,000 in sales for my book series, A Best-in-Class iOS App, I take a second to look back on what's gone great and what's not been so great.

Drag to Reorder in UITableView with Diffable Datasource

Support drag to reorder in a UITableView using a diffable datasource.